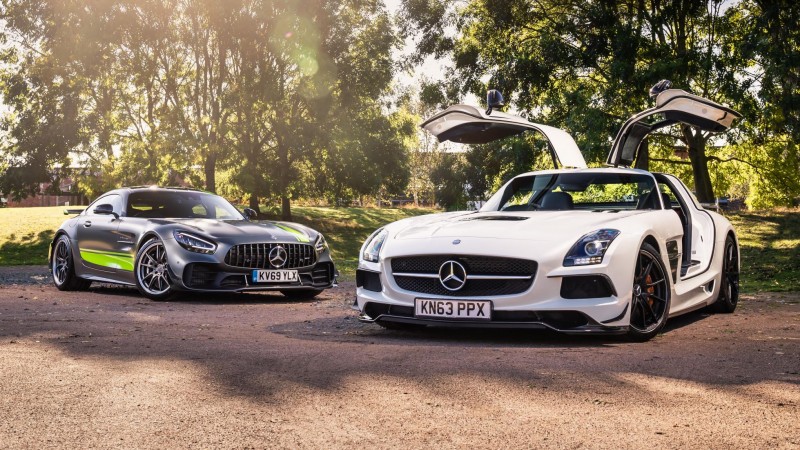 Aren’t gullwing doors just the best? We wish they’d made it into the AMG GT too. But alas, the GT was never really meant to replace the SLS, which Mercedes saw as a rival to the Ferrari 458, McLaren 12C and so-on. It was a proper supercar, hence it could justify a pair of theatrical, expensive, impractical doors. Doors it could, and probably should, have done without.

The GT, though, is supposed to be a viable alternative to a Porsche 911 - a sports car you might consider using everyday (until you try to park it in your average multi-storey and realise just how wide and obtuse it feels in such situations). So it needed normal doors. Doors you can close if you’re under 6ft tall without a makeshift pulley, and whose hinges don’t need to be rigged with explosives to blow them off if you roll over.

This particular AMG GT is not one you’d want to use everyday, though. As if the spoilers, skirts and stripes hadn’t already given the game away. These two cars are by far the most hardcore road-going Mercedes of their eras. The GT R Pro you’ll be familiar with from TG24, in which it features heavily and (spoiler alert) does very well indeed. Longtime readers may also be familiar with the SLS Black Series - the star of 2013’s Performance Car of The Year test. Six years separate them, but the formula is the same - lighten, stiffen and downforce-en - and so too are the results: bloody fantastic.

Mercedes only built 50 SLS Black Series, and a mere handful in right-hand drive. This one, which still belongs to the company itself, cost just shy of £250,000 new and was valued at £600,000 a couple of years ago. And you know what? I might just pay that, if I had the money. I’m not sure the £188,345 GT R Pro will ever be worth quite that much - partly because Mercedes is building 750 and that’s too many, but mainly because though it’s undoubtedly one of the very best performance cars you can buy today, it’s not as transcendently brilliant as the Black.

Revving the old 6.2-litre N/A V8 (which Mercedes still uses in its GT race cars) out to its 8,000rpm redline (800rpm more than standard) is a life-affirming thing all petrolheads should experience before they die. For the Black, Mercedes gave the V8 a larger inlet manifold, a high lift camshaft, lighter bearings and stiffer conrods among other things, and in doing so created one of the great engines of our time.

It’s not as if the new car is any quicker in a straight line. In fact, though the specs differ (the Pro is 45bhp less powerful, 48lb ft torquier because turbos), the numbers are more or less identical: 3.6 seconds to 62mph for both, and top speeds of 196 and 198mph for old and new respectively. The GT R is undoubtedly quicker around a track, however, even though it weighs 25kg more than the Black. For a graphic demonstration of how far performance cars have come in such a relatively short period of time as six years, just look at the ‘Ring times. A GT R Pro can lap the Nordschleife in 7 minutes 4.63 seconds, while the SLS takes 7 minutes 25.67 seconds. Over 20 seconds slower than the GT R Pro, and only five seconds faster than the fat, all-wheel drive AMG GT63S four-door. Five seconds over 13 miles is nothing.

On public roads, both of these cars are intimidating things. By dint of their sheer width, comedy proportions and prodigious power. Certainly too much for any public road, where you have to pick and choose your moments as carefully as you might your first born’s name. The Pro is unquestionably the quicker of the two and thanks to its cleverer nine-stage traction control, easier to drive. But the way the SLS feels in your hands is just lovely. Natural (more so than the Pro), beautifully damped and if you treat it with respect, totally trustworthy. You never get the sense it wants to spit you off into the hedgerow if you get your line a bit wrong, or get on the power a fraction too early.

There is going to be a GT R Black Series, so there’s more to come from the new car. Thankfully, AMG’s engineers have a tremendous past to work off, and an all-time great in its back catalogue to refer back to. Big things are coming. Fast things.